The name is derived from New Latin for cross-bearing. The four-petal flowers that grow on these plants were thought to resemble the holy cross to the first people who cultivated them.

The magic these plants have

Cruciferous vegetables are considered to be great for disease prevention – especially some cancers. They are high in Vitamin C, K, beta-carotene and calcium.

I have heard that too much cruciferous intake may adversely affect the thyroid’s ability to absorb iodine. Such a reaction would interfere with your metabolism. How much is too much?

According to Dr. Angela M. Leung, Chair of the Public Health Committee at the American Thyroid Association, exposure to high amounts of thiocyanates, found in cruciferous vegetables, can potentially result in hypothyroidism (an underactive thyroid) and goiter.

However, don’t be alarmed. If you consume these vegetables in their usual meal portions, you’ll be safe – so, eating them as you normally do in salads or as a side dish, don’t worry.

If you start juicing large amounts of cruciferous vegetables every day, a health issue may (but not for certain) develop; so please check with your doctor about your thyroid before you start drinking three to five glasses of juiced kale or juiced turnips a day.

Dr. Joel Fuhrman states: “… no human study has demonstrated a deficiency in thyroid function from consuming cruciferous vegetables. Only one such study seems to have been conducted as of yet; in that study, no effects on thyroid function were observed in subjects eating 150 grams of cooked Brussels sprouts daily for 4 weeks.”

The noted doctor, who specializes in nutrition, also states “… cruciferous vegetables are protective against thyroid cancer.”

Cruciferous vegetables contain nitriles, with Brussel Sprouts having the highest amount. (Actually, several edible plants such as lima beans, yams and cassava contain cyanide, either in the form of glycosides or nitriles. But, don’t get alarmed at this information. You just want to reduce nitriles as much as possible.)

Steaming or cooking cruciferous vegetables reduces the nitriles. Fermenting them does not make any difference. Juicing concentrates the nitrile content and impact.

When you are eating moderate to large amounts of cruciferous vegetables regularly, and are concerned that it may cause a thyroid issue you may want to pay extra attention to include iodine-rich foods as well, especially if you are a vegetarian, vegan or on a restricted diet that does not include seafood and seaweeds. Of course it is always recommended that you check with your health practitioner before making any dramatic changes in your diet.

Foods rich in iodine include baked potato (not mashed!), cranberries, dried seaweed, shrimp, and dried prunes. But let’s get back to our Health Slaw.

2.)   Blend dressing ingredients and adjust flavor as needed to balance the sweet and sour flavor.

3.)   Add Mayonnaise and milk to slaw; mix well, and refrigerate until serving time. 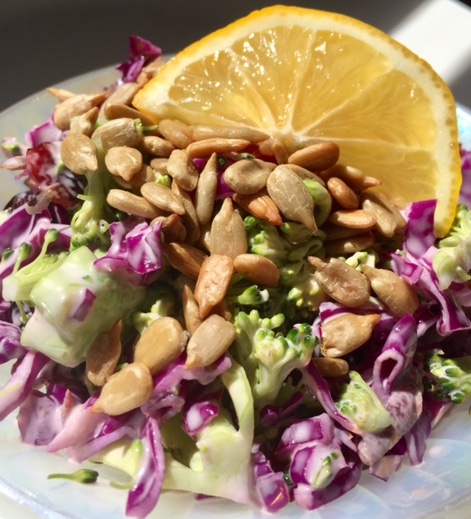